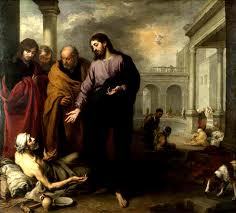 I am fortunate to still have my mother with me and in good health.  There was a time when I considered writing a book about my mother's family that would be only somewhat fictional, meaning the only thing I would change would be the names.  My mother comes from an interesting family, to say the least, and I believe some of the events that happened early in her life shaped the person that she is now.

My grandfather was "right off the boat", as they say.  With his light hair and blue eyes, no one thought twice when he changed his Italian name to an Anglo one and tried to pass himself off as an American.  An engineer, he married my grandmother when she was still in her teens and they lived a comfortable middle-class life on a little acreage in Southwest Philadelphia.  They had four daughters and one son together, the boy coming at the end of the line.  The children lived on a little suburban oasis with a playground and chickens and rabbits and other pets. They were well-dressed, well-fed and well-schooled.

One day, as he was waiting for the train to take him home from his job, my grandfather suffered a massive heart attack.  He was dead before his body hit the platform.  The youngest was barely out of infancy.  There was no Social Security or welfare at the time.  My grandmother took a job sewing draperies in a factory and the children were parceled out to various relatives.  My mother, second youngest, was not even five when she was sent to live with an aunt and uncle she had never met and their two teenaged boys.  My mother lived a privileged life with her relatives, but all she wanted was to come home to her mother.  Some years later, she did.  The family lived in near poverty and if it weren't for the generosity of the nuns, they would have gone without a holiday dinner at Christmas and Thanksgiving.  My mother often told me of having only one or two pairs of socks and underwear and having to rinse them out every night in order to have something clean for the next day.

I think that it is because of the trauma of being separated from her family at such an early age that my mother tends to cling emotionally to me and my children, to the point where it can become suffocating.   I was complaining about this the other day to my husband when I had to curtail my Divine Mercy Sunday activities in order to be at Sunday dinner on time.  God is all well and good, but let Him interfere with my mother's plans for Sunday dinner, and watch out.

"Why can't you go the Divine Mercy Mass over here? Why do you have to go all the way to that Monastery? I don't like that drive.  Be careful.  Don't be late."

Talk about a conflicting message!

"You're not going to have them that much longer," my husband said ruefully, and I knew it's because he was thinking about his own parents.  He lost his mother and father within six months of each other.

My mother has an odd set of beliefs.  She faithfully attends Mass each week, daily when possible, and is very active in her parish.  Growing up, I remember that she was always part of the group of ladies that cleaned the church each week and every Monday evening she was at Sodality.  But she has a very generous interpretation of the Catechism of the Catholic church.

When I was contemplating my return to the church, I went to a memorial Mass with her for a relative.  When it came time to go to Communion she told me I could go because the priest had already absolved me of my sins.  "When did that take place?"

"At the beginning of Mass, when he said "may almighty God have mercy on you, forgive you your sins and bring you to everlasting light."

Fortunately, I did not believe her.

My mother and I were estranged during my adolescent years.  It was her choice, not mine.  She went through some difficulties at the time with early menopause and while I have forgiven her for what happened, it was not easy to forget.  I never dredge up the past as to do so would only serve to inflict hurt.  But I often wonder would have happened had she not wandered away from the church and from my father.  My parents were actually separated for three or four years and eventually got back together.  During that time, my faithful Catholic mother stopped going to Sunday Mass and Monday Sodality.  When she lost her way, I lost mine, too.  I don't blame her for that, but it has served to reinforce how important my example is for my children to remain faithful.

Now that my mom is getting up there in years, she can be excused for some of her goofiness.   I invited her to go to the TLM one Sunday with my daughter and me.  She got to my house just five minutes before Mass was to start.  I was exasperated with her when I found out the reason she was late was because she decided to pick up some tea biscuits for my father on the way over.

"You worry too much" she told me when I complained we were going to be late.  "That Mass is and hour and a half long.  You could miss five minutes and not miss anything."

Luckily, the celebrant was running late from the previous Mass and we got there just in time.

"See" she said, louder than what I found acceptable.  I shushed her.  Yes, I shushed my own mother in church.

The other day, when I got hopelessly lost on my way to a conference, I called my mother. Yes, GoogleMap can be wrong.  I learned that first-hand.   I knew my mother had been to the place where the conference was being held numerous times and could direct me there.  She could tell how upset I was because I was late and would have to suffer the humiliation of entering a room full of big-wigs an hour past the time I should have been there.  It was pouring rain.

"Stay where you are, I'll come get you and lead you there."  She came out in her pajamas with a jacket over them.  For a minute I forgot that I am 50 years old and my mother is 72.  She lead me to the conference center and then rolled down the window to give me a pep talk.

"Don't worry about being late.  Just walk in there like you own the place.  To hell with those people if they don't like it. They probably won't even notice."

Comments which reflect true Christian charity are always welcome. Comments which attack the Pope, the Church, priests or other bloggers will go in the dustbin, especially if they are anonymous. Thank you and God Bless you! 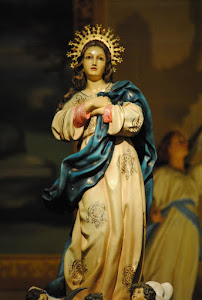 Pray for us who have recourse to thee 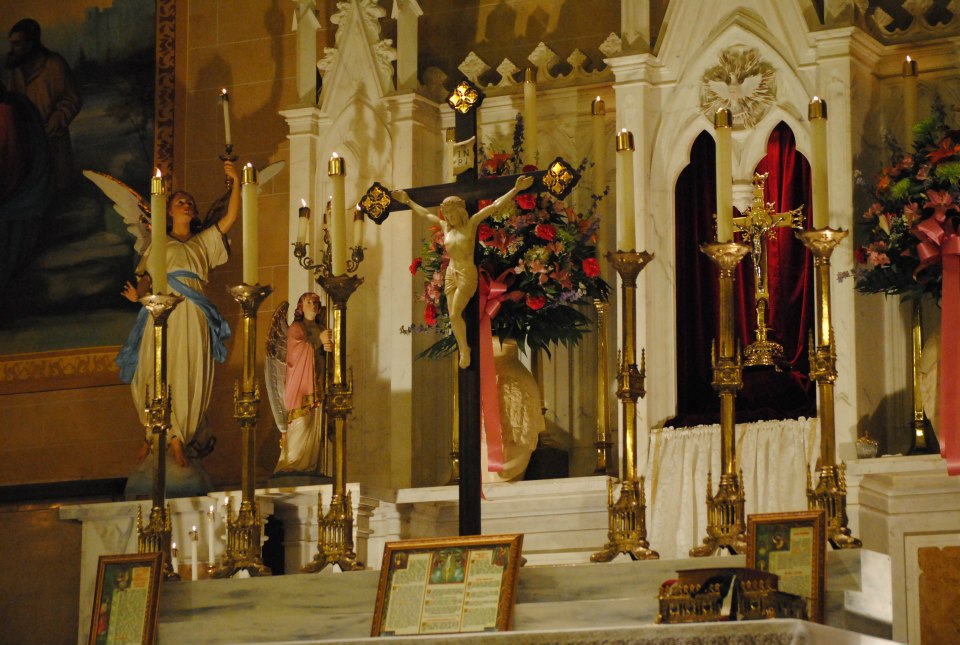 The Closest Thing to Heaven on Earth

The Struggle of This Soul

"Jesus, we are sensitive to words and quickly want to answer back, without taking any regard as to whether it's God's will that we should speak. A silent soul is strong: No adversities will harm it if it perseveres in silence. The silent soul is capable of attaining the closest union with God." St. Faustina 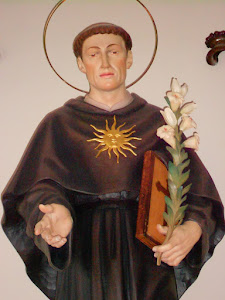 Pray for us and for our beloved dead

Soul of Christ, sanctify me
Body of Christ, save me
Blood of Christ, inebriate me
Water from Christ's side, wash me
Passion of Christ, strengthen me
O good Jesus, hear me
Within Thy wounds hide me
Suffer me not to be separated from Thee
From the malicious enemy defend me
In the hour of my death call me
And bid me come unto Thee
That I may praise Thee with Thy saints

and with Thy angels
Forever and ever
Amen

Sacred Heart of Jesus, Have Mercy on Me a Sinner 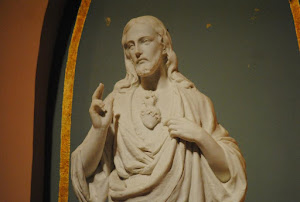 "Behold this Heart, which loves men so much but they do not want to love Me in return" 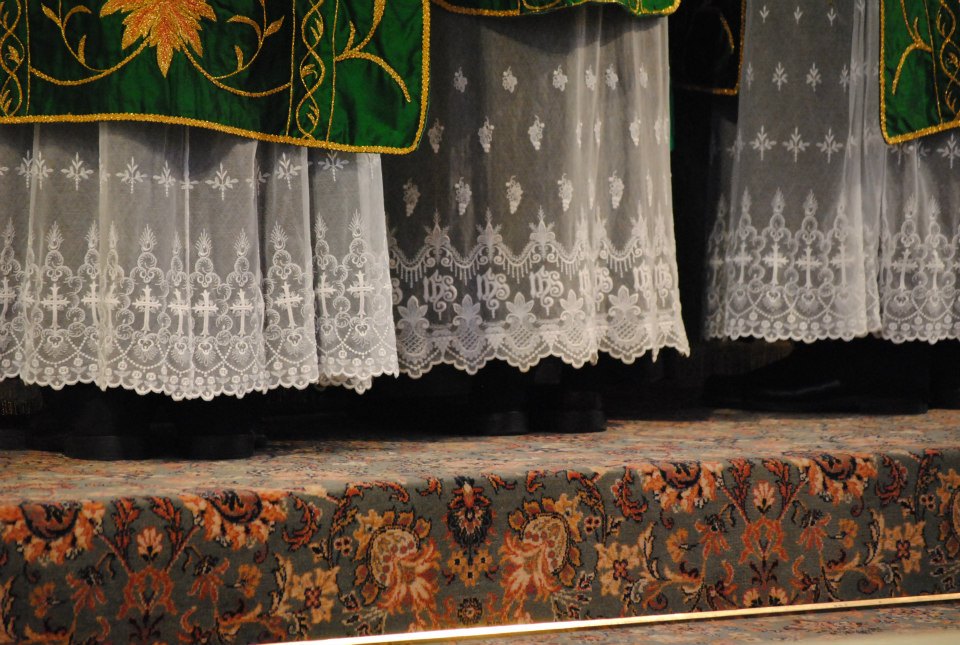 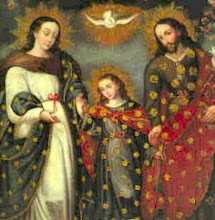 Unless we believe and see Jesus in the appearance of bread on the altar, we will not be able to see him in the distressing disguise of the poor - Blessed Mother Teresa of Calcutta

St. Teresa of Jesus, Pray for Us 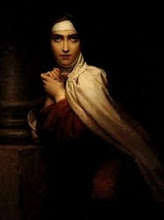 St. Raphael, Pray for Us 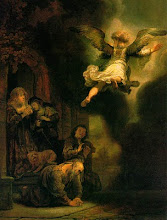 St Catherine of Sienna, Pray for Us

Ecstasy of St. Teresa of Jesus 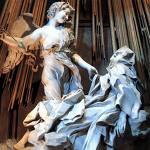 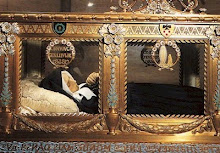 Pierce, O most sweet Lord Jesus, my inmost soul with the most joyous and healthful wound of Thy love, and with true, calm and most holy apostolic charity, that my soul may ever languish and melt with entire love and longing for Thee, may yearn for Thee and for thy courts, may long to be dissolved and to be with Thee.
Grant that my soul may hunger after Thee, the Bread of Angels, the refreshment of holy souls, our daily and super substantial bread, having all sweetness and savor and every delightful taste.
May my heart ever hunger after and feed upon Thee, Whom the angels desire to look upon, and may my inmost soul be filled with the sweetness of Thy savor; may it ever thirst for Thee, the fountain of life, the fountain of wisdom and knowledge, the fountain of eternal light, the torrent of pleasure, the fullness of the house of God;
may it ever compass Thee, seek Thee, find Thee, run to Thee, come up to Thee, meditate on Thee, speak of Thee, and do all for the praise and glory of Thy name, with humility and discretion, with love and delight, with ease and affection, with perseverance to the end; and be Thou alone ever my hope, my entire confidence, my riches, my delight, my pleasure, my joy, my rest and tranquility, my peace, my sweetness, my food, my refreshment, my refuge, my help, my wisdom, my portion, my possession, my treasure; in Whom may my mind and my heart be ever fixed and firm and rooted immovably. Amen.

What You Read On This Blog....

You may use anything I have written on this blog. You do not need to credit me, though it would be nice if you did to increase traffic to this blog. Somewhere in "The Story of a Soul", St. Therese commented that she could not concern herself with whether someone took credit for one of her ideas or observations because, after all, everything that is good and holy is inspired not by ourselves but by the Holy Spirit. If you find something useful here that you'd like to print on your own blog or elsewhere, be my guest. It doesn't "belong" to me in the first place.

If you email me, rest assured nothing you send me will be used, unless you have explicitly granted me permission to do so.

Blog links which appear on The Unprofitable Servant may contain content with which I do not necessarily agree.